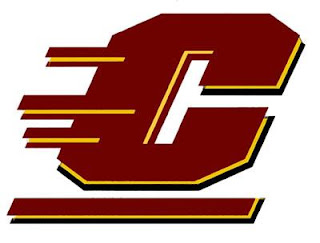 And thus begins a series of posts that only I and maybe a few others will care about. If everything goes according to plan, I will be writing short wrap ups for each game for the mighty Central Michigan University Chippewas. Some of this plan will live or die on whether I am able to watch/listen to a specific game, which is never a sure thing.

Today, I'm going to give a few thoughts, hopes, and fantasies for the upcoming season.


First, let's take a look at the schedule:

There is no part of this schedule that isn't brutal. We start with an easy game against an FCS team then go on the road for three tough games, including the rivalry game at WMU, and a revenge game at MSU (they will be looking to avenge that 2009 loss and are one of the top teams in the country). Then we come home to play the team most everybody has planned to pick the MAC West. So what this means is that we have a winnable game in week 1, and we don't get another one until week 7! Then we get three more road games followed by another couple of tough conference games. That is brutal.

I hate to say it, but I don't have a lot of hope for a winning record this year. I don't want to discount any FCS team (I've seen the team lose to them before) but I'm willing to bet that we have a 1-5 record heading into the Eastern game. I am hopeful that some players step up, and if they do, and we get a couple of good early wins against Western and NIU, the season could be a winner.

Let's be honest, those games against Kentucky, State, and NC State are probably loses right off the bat and I'm enough of a MAC fan to know that those games don't really count towards whether the season is a success or failure. I haven't done a lot of scouting on Kentucky or NC State, but either of those games could be surprise wins. I'm going to say that we do not catch Michigan State sleeping this year like we did in 2009. We also had a very good quarterback in his senior season and a HELL of a lot of luck in our favor to squeak out that win (but what a sweet win it was), but I doubt that is going to happen again. State is too good this year, too well coached to lose focus, and have some good motivation not to repeat the mistakes of two years ago. That game is going to be especially brutal. As with most years, a non-conference record of 2-2 will be a success, but 1-3 is much more likely.

Now, I haven't done a lot of scouting of the MAC in general, but from what I hear, the cream of the West is between NIU, WMU and Toledo. NIU has a good team but is dealing with the loss of head coach Jerry Kill who will be looking to return Minnesota to winning ways. They have a lot of solid players and were a bowl team last year and look to maintain that form. WMU also has a lot of great players, but they all go to Western so they're all crap. Still, I am not hopeful that we'll get a win this year.

The big question for the team will be whether quarterback Ryan Radcliff can mature in his second year as a starter. Radcliff never stood out last season, coming into the tough shoes of taking over the spot from Dan Lefevour who broke basically every record in the CMU book. He was helped a lot by breakout receiver Cody Wilson. If the tandem can get on the same page, they could be one of the most dangerous duos in the conference. The problem on offense is the same that it's always been, which is at running back. In my years since becoming a Central student and fan, our team has never had a standout running game, and this year does not look to be the year it happens. I couldn't even tell you who the backs are right now, but hopefully one of them will break out and make a name for himself.

The big news on the defensive side is the loss of linebackers Nick Bellore, who ended his career tied for third all time in tackles in CMU history, along with his partner in crime Matt Berning (both of whom were undrafted free agents for the NY Jets, I hope one of them makes the team). Who is going to fill the void left by thier departure? That is going to decide which way the defense goes this year.

Well, I've gone on for a long time and it is time to wrap things up. My prediction for Central's record at the end of the year? I'm going with a record of 5-7. A slight improvement by Radcliff and Wilson will win some of the close games that were losses last year. If the defense can hold together, and if we can get a little luck, they may even be able to reach a bowl game this year, but I'm not exactly hopeful for that. Fire up Chips!!
Posted by Unknown at 6:01 PM