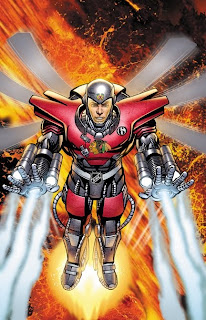 When DC rolled out its plan to relaunch their entire universe and restart everything with a new #1 issue, the most surprising book I saw on the list was Blackhawks. I mean come on! Who wants to read a book about a mediocre hockey team?!?! It doesn't make any sense. I suppose Chicago is a big city, and the Blackhawks are a popular team, but how do you turn this into a comic? I was able to find out when I read this first issue.
The issue starts with Captain Toews assembling his team to fight the looming threat of the Cavity Creeps. The writer presents us a pretty large cast, and does a fair job of punching up their personalities from the bunch of useless hacks and divers that they are in real life. The characters in the book have to deal with being the weaker team in a larger organization, and they are constantly trying to make themselves think they are better than other teams, especially after they get fluke wins. What the writer can't do is make the characters, or "players" as they are referred to, seem like less than little crying douchebags. Most of them are written as unlikeable jerks and I never felt like they were an actual team, so much as a collection of individuals thrown together.
The whole story wraps up with an insane trip to the mall where the team fights Captain Kangaroo Pimp and his team of ninjas. At least this part is kind of exciting, and the art is well done. All in all, this isn't a very good book, and I don't think this is going to last very long. Maybe if the book changed focus to a different team, I would care more, but as of right now, I couldn't care less.

Wait a minute....you mean this book doesn't exist? The actual Blackhawks #1 is about a bunch of mercenaries in the DC universe? The story by Mike Costa looks pretty interesting, kind of a GI Joe of the DCU, and the art by Ken Lashley looks pretty good, and it's in stores today, Wednesday 9/28/11? Well then what the hell was I reading? Did I dream all that hockey stuff, and the Cavity Creeps? I really need to stop eating two extra large pizzas before bed. I always get the weirdest dream. You should hear about the dream I had where I had to track down Mike Tyson because he had stolen all my comics and was trying to sell them to former President Ike Eisenhower, who kept saying "Let's Get Busy". But that's a story for a different time...
Posted by Unknown at 6:45 AM