Get Ready for Avengers VS X-Men, Coming April 2012

I'm posting this because it would have gone up at http://www.geeksofdoom.com but some other smarmy bastards beat me to the punch. So, this is what I would have posted about it.Also, I need to get back in the habit of posting here. I let this slip away, and I am sorry you poor neglected blog you.
What do you get when you add five writers, three artists, and one all-powerful force of nature? Why, it’s Marvel Comics next big event! On Tuesday, Marvel formally announced Avengers VS X-men, a twelve issue mini-series launching in April 2012. The series is written by five of Marvel’s biggest writers; Brian Michael Bendis, Jason Aaron, Jonathan Hickman, Ed Brubaker, and Matt Fraction. Joining them on art duties will be John Romita Jr., Olivier Coipel, and Adam Kubert. The series will ship bi-weekly, and will also be available in comic stores and on the Marvel comics app on the same day. Marvel is also going to offer a code to download a free digital copy with each print copy, at no extra cost. Marvel has also set up a website just for the series at http://avx.marvel.com.
According to Marvel, Avengers Vs. X-Men  starts off with the teams learning that the Phoenix Force, the power of life and rebirth that is generally associated with Jean Grey of the X-Men, is on its way to Earth to choose a new host. The return of the Phoenix leads to a decision that pits two of comics biggest teams against each other in a story that will be sure to CHANGE EVERYTHING AS YOU KNOW IT!!!!! All kidding aside, who doesn’t like to see a big throw down between heroes for no good reason? Marvel Entertainment Editor in Chief Axel Alonso had this to say about the series: “Avengers VS X-Men brings together the most powerful forces in comics for a super hero war like you’ve never seen before and will never see again. We all want to see the best of the best go against each other—Lakers & Celtics; Ali & Frazier; Yankees & Red Sox; and in comics it’s the Avengers fighting the X-Men.  We’ve brought together the biggest writers, biggest artists and biggest characters for the biggest story we’ve ever told. This is the kind of high-octane action-packed story that fans demand while also having a profound effect on every character involved—and reshaping the Marvel Universe in its wake.”
If you’re like me, you’ve seen a lot of these events from Marvel and DC over the last few years, and you may or may not be getting a little tired of see them. I don’t think I’m alone in saying that Marvel’s last event, Fear Itself, left me a little cold and is making me a little leery about this one. The other thing I’m worried about is the FIVE writers bringing this thing to life. Will they be able to bring a cohesive vision to the series, or will it come off as being written by a committee? I worry that this is going to be the classic example of too many cooks in the kitchen. On the other hand, the series does have three of my favorite artists working on it, and I’m also a big Marvel fan, and this is the kind of thing I enjoy. I hope that they go for a more light-hearted tone and not make the thing overly serious, but somehow I doubt that is what we will get. I want to read a fun event with some crazy action. I don’t want to see Cyclops crying over the body of a fallen teammate. I’ll have to wait and see what tone Marvel seems to be going for before I decide if I will pick this up.
So, are you excited to read this or does it just seem like more of the same? Let us know what you think about Avengers VS X-Men in the comments below. Do you think it will end with the marriage of Danger and The Vision? How will the fight affect  the Black Panther and Storm? Will this really be the return of Jean Grey? How is it all going to end? 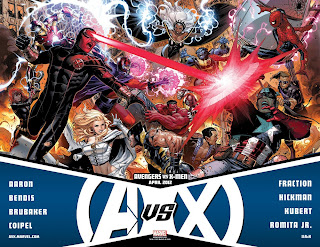