From the Ladle to the Grave: The Story of Shallow Gravy 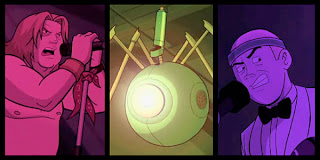 Got a chance to watch the all new Venture Brothers special that aired this past weekend and is available now on iTunes (at least in the US). It wasn't too bad. Not great, certainly not as good as the previous VB special, which was the Christmas special that came out a while ago. i think the biggest problem with it is that "Behind the Music" parodies weren't even that good when BTM was a viable force in pop culture, and BTM parodies have not gotten fresher with age. Plus it was mostly clips from old episodes. There were a few good jokes, especially the parts with 21 and The Monarch. Your enjoyment will depend on how much you like Dermett. It's woth the $1.99 I spent on iTunes though, but then again, I have a Lions shirt with the name Henchman 21 on the back, so I may be biased.
Expect a fuller review on Geeks of Doom as soon as I get a free second today. I just wanted to get some thoughts down on it and to post something today. I hope to be back later with a possible MAC football preview and 101 reasons why I hate the term "Mouth Breather" as a pejorative.

Enjoy your day!
Posted by Unknown at 8:46 AM